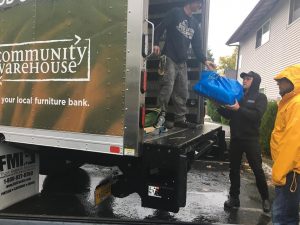 Community Warehouse Procurement/Delivery Coordinator, Dan Lawlor, and his team are accustomed to a full schedule of daily donation pickups and deliveries. But on a recent winter morning, they were assigned an unusual all-day delivery project. Parking their truck filled with new mattresses outside a nondescript apartment building in the Rockwood neighborhood. They waited while representatives from RAIN (Refugee Assistance and Information Network) International knocked on doors of recently resettled refugee families to bring them some good news:  after enduring the hardships of travel, trauma of dislocation and relocation they were getting new beds to go with their new homes.

Lawlor helped unload and distribute 55 new beds to refugee families from many countries including Somalia, Burma, Iran, Pakistan, Iraq, and Syria. Families ranged from single mothers with their children, to families of up to eleven people comprising multiple generations.

“I got a sense of a little bit of nervousness, people being unsure at first until they realized we were there to give them beds. Then we were pretty much met with all these smiling faces,” says Lawlor.

RAIN International received a grant for 55 new beds as part of IKEA’s 5000 Dreams campaign which donates beds and bedding to refugee families that are starting new lives in the United States. RAIN received over 500 referrals from local case managers representing families in need of beds.

“We know most of these families have never received or owned a new bed,” says RAIN International Director Kelsey Lebruan Keswani who initially reached out to Community Warehouse to facilitate the delivery of the beds.

“I couldn’t even imagine someone’s feelings, having to leave their home country and come to a new place not knowing what people are going to think, maybe having some knowledge of what’s going on politically right now,” says Lawlor.

This delivery came about, thanks to the collaborative spirit of local and state nonprofits, explains Community Warehouse Tualatin Program Manager, Harmony McDonald Prinsen. “Kelsey and I worked for a program funded by the Office of Refugee Resettlement several years ago…I think that collaboration is key and networking is a critical piece of the puzzle to get these families what they need to thrive. Many experience barriers to working with social service agencies and within our systems so the more we as nonprofit service providers can collaborate and network to meet the needs of this population, the better!

The delivery marks a new stage in an ongoing effort by both RAIN International and Community Warehouse to provide resources for a growing refugee population in the Portland area. The Community Warehouse originated out of efforts in the late 1990s to support resettlement efforts for refugees from the former Soviet Union and the understanding that having the basic goods every household needs is a fundamental part of rebuilding a life for families that have been without stability for a long time.

“This is why community warehouse is here,” Lawlor reflects,  “Why we should exist. You can’t come out of that [kind of work day], thinking negative thoughts.”

Hours & Locations
It’s amazing how much work can be accomplished by so few when the hearts are dedicated. You guys are the real deal.
Jane Green

Both of our Warehouses are opening late on Wednesday 4/14. Donation Drop-off hours will be from 1 pm to 4 pm.

Thank you for understanding!